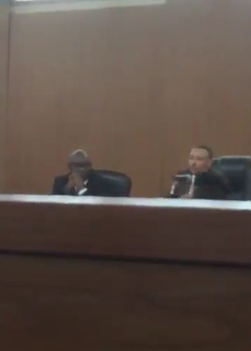 The mild drama that ensued today at the court during the Code of Conduct Tribunal where its  Chairman, Danladi Umar erupted violently during a motion raised by one of Senator Saraki’s lawyer Raphael Oloyede reminding him of an existing motion filed on Wednesday, April 20th, 2016, seeking the CCT boss to disqualify himself from participating in the trial based on bias.

Danladi Umar reacted angrily to the lawyers request and threatened to charge him for contempt before sending him out of the court room.

Interestingly, the video of Umar flaring up angrily has circulated through different online mediums and the majority of the Nigerian community on Twitter has condemned his attitude as a presiding judge losing his temper easily when it is obvious that his job entails that he’d be met with stiffer provocations as provided for both the defense and prosecution team.

A twitter user, @Adekunle025, described Umar’s attitude as unprofessional of presiding judge and chairman of a Tribunal for that matter.

Another twitter handle, @ said: Danladi Umar yelled at a fellow lawyer and shouted “Shut Up”. This clearly shows that he’s biased and doesn’t want to entertain arguments.