Former Senator representing Kaduna Central, Shehu Sani has described President Buhari’s call for the United States to relocate its Africa Command from Germany to Africa, as an open invitation for recolonisation of Africa.

President Buhari had made the call during a meeting with US Secretary of State Antony Blinken, against the backdrop of growing security challenges in the continent.

Reacting to this, Sani stated that such call will push other foreign players to follow suit, leading to the military balkanisation of the continent.

“Once the US relocates their HQ to Africa, Russia, China, Iran, Saudia, Israel, and co would follow suit with establishing their Commands HQs, and then Africa will be militarily balkanized; then we either become like Korea or like Syria.

“Over six decades since Independence, African countries should purposefully work together to confront & address their security challenges, while honorably seeking foreign technical assistance. The call for the US to relocate its @USAfricaCommand HQ to Africa is unconscionable.” 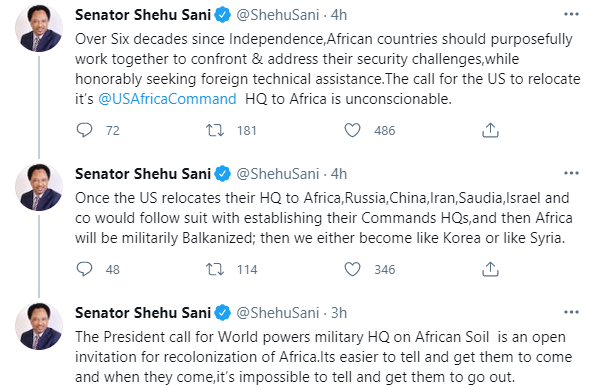